In the winter of 2014/2015 we had to think again when we were asked to measure hand arm vibration exposure on a vehicle assembly line. The tools in use were a wide variety of pneumatic and battery powered torque wrenches and nut runners. One operator could use up to ten different tools for a couple of seconds at a time over hundreds of nuts during a shift. No one had complained of any ill effects but no measurements had been taken to prove the scale of hazard or risk.

END_OF_DOCUMENT_TOKEN_TO_BE_REPLACED

Workforce First Limited would like to wish you a Happy and Successful 2017!

News stories are being written; please watch this space.

END_OF_DOCUMENT_TOKEN_TO_BE_REPLACED

Winter 2013 an automotive pressings and fabrication company employed a welder who developed a rash over his whole body. The medical history of the welder pointed to occupational exposure being the cause of the rash. The occupational physician wanted to know what the welder had been exposed to that may have caused this allergic reaction. The physician believed that inhalation exposure rather than contact with the allergen was the cause. 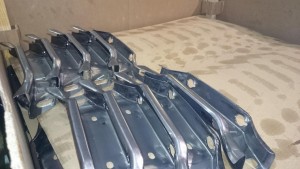 We were called in to investigate. Parts from the UK, Spain, Netherlands and Sweden were welded. The parts were coated in oil. The material safety data sheets for the oils used on the parts were collected and organic based oils such as Tall oil and Pine oil were identified. Samples of the oils were taken by wipe and sent for analysis by gas chromatography for semi volatile hydrocarbon identification analysis. These results were sent to the physician. Samples of “fume” from fuming parts coming out of the adjacent robot welder were analysed for semi volatile hydrocarbons.

END_OF_DOCUMENT_TOKEN_TO_BE_REPLACED

A major pressing company had received information from their client about risks to health from hand arm vibration during the rework of pressings. My client invited me to measure vibration levels on their random orbital sanders. What made this survey different from other HAV surveys was that my client had also invited a representative from the tool manufacturer to trial different accessories as well. The idea was to measure vibration levels on normal work and to identify what made the vibration increase and decrease and by how much. This information would be used by my client to manage hand arm vibration exposure.

I used a Castle vibration meter with the triaxial accelerometer held on with cable ties, tightened with a cable tie tightener.

END_OF_DOCUMENT_TOKEN_TO_BE_REPLACED

As occupational hygienists who are handy with a noise meter, we sometimes get asked by our clients to investigate environmental noise. Usually this has been in response to neighbour complaints or at the planning stages of requesting planning permission for longer operating hours. Under BS4142 an Initial Appraisal can be made using an integrating sound level meter used for occupational noise. A full survey requires an environmental sound level meter that can measure A90s and requires prediction software.

This particular investigation in summer 2014 was for a growing woodworking company in a mixed industrial and residential area. Our client had received neighbour complaints about a variety of issues from one particular neighbour from when they first moved in. The reason they called me was pre-emptive prior to fitting silencers onto two large fans (which had been the subject of a complaint).

I decided to measure the noise level by the fans with and without the silencer treatment.

END_OF_DOCUMENT_TOKEN_TO_BE_REPLACED

In spring 2015, following a noise survey undertaken by another company, this client asked me to retest noise levels and noise exposures in their packing hall. The company had been given a noise report which concluded that the employees were exposed to noise above 85 dB(A) and that hearing protection must be worn. The company could not understand why noise exposures were so high
when the packing hall was very quiet. If noise exposures really were that high, they needed to know where the noise was coming from and what they could do about it. This information was not in the original report.

I visited the site. The background noise level with the radio playing was around 70 dB(A). It was quiet! I decided to shadow operators for a cycle on each type of workstation. I used a recently calibrated sound level meter which I held by the operator’s ear. I noted the sound level for each task they performed.

END_OF_DOCUMENT_TOKEN_TO_BE_REPLACED

Stop Dust Before it Stops You